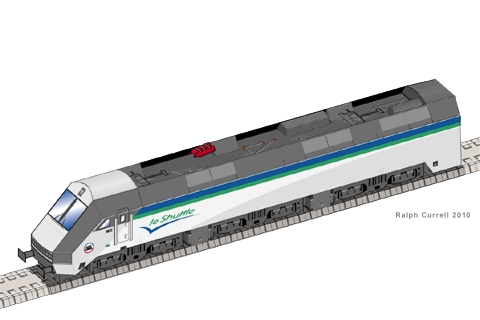 This model builds into a 1:160 scale replica (N Gauge) of a Class 9/0 Shuttle locomotive in its original ‘Le Shuttle’ livery, and is approximately 5½ inches (13,5 cm) long when complete.

You will need a colour printer capable of handling card or cover stock to print the parts sheets. 67 lb cover stock (approx 8.5 thousandths of an inch or 0.2 mm thick) is recommended.


shuttle_loco_instr.pdf - 159 KiB - This document contains the instructions only (3 pages).

shuttle_loco_parts.pdf - 309 KiB - This document contains the parts for the model (1 page).

The parts and instructions are in Adobe PDF format. Your web browser may allow you to read and print these files, otherwise you'll need a PDF reader such as Adobe's Acrobat Reader or Foxit Reader.